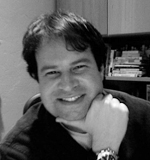 Jeff Artzi was born in Brooklyn, New York and grew up in Southern New Jersey. He began writing songs as a teenager. During his senior year at Brandeis University, he collaborated with his classmate, Daniel Tenenbaum, on an original musical about college life, “Dare to Be Different.” The musical was chosen to be performed for parents, students and faculty as part of the annual Parents Weekend celebration. He earned his M.B.A. from New York University in 1990. He then founded and built several successful businesses.

He is currently the CEO of a chain of complete auto care facilities in the southwestern United States. In early 2007, Daniel approached Jeff about collaborating on the musical adaptation of “Pickle-Chiffon Pie,” written by Jolly Roger Bradfield in 1967. Jeff lives in Tucson, Arizona, with his wife and three children. 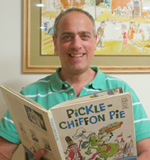 Daniel Tenenbaum was born and raised in suburban Minneapolis. He fell in love with musical theatre as a pre-teen and has seen over 450 different musicals since that time. During his senior year at Brandeis University, he collaborated with Jeff Artzi on an original musical about college life, “Dare to Be Different.” The musical was chosen to be performed for parents, students and faculty as part of the annual Parents’ Weekend celebration. He earned his J.D. from the University of Pennsylvania Law School in 1990. Since that time, he has built a successful legal career working with entrepreneurs and venture capitalists. For over a decade, he has been the Chair of the Entrepreneurial Services Group at Gray Plant Mooty, a prestigious Minneapolis-based law firm. Daniel is active in the Minneapolis theater community. He served on the Board of the Hennepin Theatre Trust for over a decade and is currently Board Chair of the Minneapolis Musical Theatre, where he’s been involved for the last 15 years.

Daniel approached Jeff Artzi about collaborating on a musical adaptation of “Pickle-Chiffon Pie,” written by Jolly Roger Bradfield in 1967. The book was one of Daniel’s childhood favorites and is now a favorite of his children. After securing the rights, Daniel worked with Jeff to complete the initial musical adaptation of the book with support and creative input from Bradfield. Subsequently, Mr. Bobbitt became a collaborator on the project, which culminated in a successful workshop production of the musical at Adventure Theatre in October 2012. Daniel currently lives in suburban Minneapolis with his wife and two children. 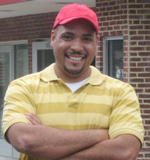 Michael J. Bobbitt is the Producing Artistic Director of Adventure Theatre MTC and has directed, choreographed and performed at many theatres in the DC region, including Arena Stage, Ford’s Theatre Society, The Shakespeare Theatre Company, Signature Theatre, Metro Stage, Rorshach Theatre Company, Studio Theatre, Woolly Mammoth Theatre Company, Center Stage, Roundhouse Theatre, The Music Center at Strathmore, The Kennedy Center, The Helen Hayes Awards and the Washington National Opera. His national and international credits include the NY Musical Theatre Festival, Mel Tillis 2001, La Jolla Playhouse, Jefferson Performing Arts Center, and 1996 Olympics. He studied creative writing and music at Susquehanna University and theater and dance at The Washington Ballet, The Dance Theatre of Harlem, The American Musical and Dramatic Academy and NY University’s Tisch School of the Arts (Cap 21). He is a member of the Dramatist Guild of America and the Society of Stage Directors and Choreographers.

As a writer, his work has been accepted in the NYC International Fringe Festival, The New York Musical Theatre Festival and has received grants from the National Alliance for Musical Theatre’s Producer-Writer Initiative, The Creative Projects Grant from the Arts and Humanities Council of Montgomery County, Maryland State Arts Council and the Puffin Foundation. Michael has taught theater and dance at George Washington University, Catholic University, Montgomery College, Howard University, and the Washington Ballet. Michael’s works include Bingo Long and the Traveling All-Stars and Motor Kings, The Yellow Rose of Texas, Say It Ain’t So!, The Stephen Schwartz Project, Going The Distance, Tigers, Dragons and Other Wise Tales, How Old is a Hero?, Bob Marley’s Three Little Birds, Black Diamond, Redskins vs. Rockettes, and revisions of Big, the musical – TYA and Rudolph the Red-Nosed Reindeer. 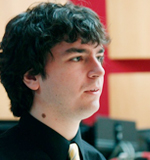 William Yanesh is a Washington, D.C.-based composer, arranger, pianist and musical director. Recent premieres include incidental music for Adventure Theatre MTC in Maryland (Winnie-the-Pooh, The Cat in the Hat) and DC Fringe Festival (Medieval Story Land), his song “Snow Day” (performed at Lincoln Center as part of the Broadway’s Future Songbook Series), his award-winning Tailypo: Ghost Story for Orchestra, his song cycles The Chanteuse and Four Campfire Songs, as well as his opera The Man in the Black Suit. As a pianist, he has been involved in productions at such venues as Cleveland’s Severance Hall, Pittsburgh’s Heinz Hall and Benedum Center, and DC’s Kennedy Center; having worked with conductors Marvin Hamlisch, Robert Page, Jay Crowder, David Loud, and Jon Kalbfleisch. As a musical director, recent shows include The Last Five Years at Signature Theatre in Virginia; You’re a Good Man, Charlie Brown at Montgomery College in Maryland (Associate Musical Director); and A Grand Night for Singing for the Washington Savoyards. He holds degrees in Music Composition and Accompanying from Carnegie Mellon University. 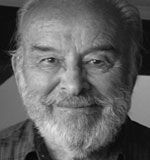 Roger Bradfield studied at the Minneapolis School of Art, the Academie Julian in Paris, and the Heatherly School of Art in London. He has headed his own commercial art studio, written and illustrated award-winning children’s books and created art for both movies and television.

Bradfield was born in White Bear, Minnesota, in 1924. He launched his career with the advertising agency Batten, Barton, Durstine and Osborn in Minneapolis, Minnesota. He then spent several years working in England and France, where he did humorous illustrations for Punch and Good Housekeeping magazines. He returned to the U.S. and opened his own commercial art studio in 1953. Among the many awards garnered at this stage of his career was the prestigious National Fashion Academy Gold Medal for his work in package design.

A successful creator of children’s books, he has won awards for his writing and illustration in this field and has had his books chosen as Junior Literary Guild selections. Bradfield is perhaps best-known for writing and illustrating the comic strip Dooley’s World, which was syndicated world-wide by King Features.